Hands down OCD is one of the most difficult illnesses to deal with. Even the ‘World Health Organization’ places it in the top 10 of the most disabling conditions on the planet.

But let’s do a simple thought experiment. And let’s just apply it to one segment of Obsessive Compulsive Disorder. Safety Checking OCD.

People with this disorder compulsively check things like the front door is locked, the power outlets are off, etc…

The likelihood of bad accidents happening increases enormously. Car’s would run downhills smashing into fences. Houses would be easy pickings for thieves. And the bath faucets could be left on flooding the entire house…that’s why we need to be careful.

We need to check things. The scenario I just presented was the complete opposite. It ‘s a world of chaos. It’s the same as OCD…except everything is in reverse.

Like I said. We need to check. We need to be careful. But we don’t want to live in a world where we’re consumed with checking. We want safety while keeping our sanity.

The problem is that we are over-careful. Doubt and uncertainty rule our minds. We keep asking ourselves with “What if I didn’t lock the door.” Then we imagine the worst-case scenario.

But how about living in the best of both worlds. Why can’t we be super careful and yet create a certainty that contains it?

We can accomplish this. We can be super careful yet not be controlled by it.

We can do this through our memory. Or rather through a trained memory.

We can have the best of both worlds. A careful attitude to motivate us to check. And a system that makes us certain. To change ‘what if’ to ‘I know.’

In a way checking, OCD can be viewed as somewhat advantageous. It makes us careful but not careless.

The memory system I teach to overcome safety OCD checking helps to bring about this balance.

It returns our checking to a normal baseline. But with one big, enormous side benefit.

With time & with this system, we check as much as normal people but are more certain about the things we do check. At least that’s possible with my memory system.

Obsessive Compulsive Disorder is quite literally one of the most difficult illnesses to deal with. According to the World Health Organization (WHO), it ranks in the top 10. Until the 1960's most treatments barely made a dent. Then in … END_OF_DOCUMENT_TOKEN_TO_BE_REPLACED

I'm in my private hospital room today thinking about how could I help someone stop excessive handwashing. Here are my suggestions which are far cheaper and easier than traditional therapy. This is my theory: OCD is an imagination problem and … END_OF_DOCUMENT_TOKEN_TO_BE_REPLACED

Imprisoned in your Own Home Warning: Do not read or use these techniques if you are a child or have 'Harm OCD.' Use the soft options instead. There are so many types of OCD that it can manifest in lots of different ways for different people. … END_OF_DOCUMENT_TOKEN_TO_BE_REPLACED

No Rescue Needed- I'll Teach You to Swim What you have before you is a unique system. This system has absolutely nothing to do with any of the existing models used to treat checking OCD. It has nothing to do with… CBT DBT NLP Exposure … END_OF_DOCUMENT_TOKEN_TO_BE_REPLACED

Book a Call With Chris Now 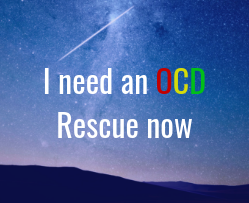